The Atlantic Garrison of the 501st Legion was founded in December of 2018 and comprises Canada’s four Atlantic Provinces: New Brunswick, Nova Scotia, Prince Edward Island, and Newfoundland and Labrador. Formerly, the group were members of the Atlantic Squad of the Canadian Garrison from March of 2017 to the end of 2018. Thank you all for the support! We’re very excited to grow even more and expand the reach of the Empire into the Atlantic.

What does the Atlantic Garrison do? We attend sci-fi, comic, and gaming conventions. Sometimes we visit libraries or hospitals. Other times it’s a parade or an organized walk for a good cause. We love what we do and we do it to help raise money for various charities.

Do you have a movie-quality villainous Star Wars costume? If you’re interested in joining the 501st Legion (and if you’re in Atlantic Canada, joining our Garrison), then click here to get some information on how to join us! 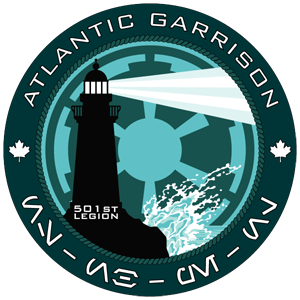